IT'S CLOBBERING TIME! Here is the unofficial Marvel toy board. C'mon in and talk ML, MU, Select, and all of the other Marvel toy lines.
Post Reply
760 posts

It's kinda interesting that Fortnite is going with Future Foundation as the next style after classic and black costume. Like, out of dozens of other suits that aren't linked to a team.

But a nice way to kick off the 60th anniversary a little early. Curious as to how much more popular the Symbiote Spider-Man figure is going to be now...

FF and iron spider are the two most prominent suits besides the red and blue and the black in my opinion. I can see how FF edges out iron spider though. I believe he wore the FF suit quite a bit longer
Top

Iron Spider may edge out FF just because of how prominent it (and various elements of it, like the back-mounted legs) have become in various adaptations the last decade or so, so I can see why Hasbro revealed it first. But yes we definitely need a redone version of the FF suit on the new body. And while we're out it, Bag-Man is a pretty well liked look among fans (if for no other reason than the meme potential) that I have to think is coming at some point in the near future.
Top

Hbhf wrote: ↑
Mon Dec 06, 2021 12:50 am
Iron Spider may edge out FF just because of how prominent it (and various elements of it, like the back-mounted legs) have become in various adaptations the last decade or so, so I can see why Hasbro revealed it first. But yes we definitely need a redone version of the FF suit on the new body. And while we're out it, Bag-Man is a pretty well liked look among fans (if for no other reason than the meme potential) that I have to think is coming at some point in the near future.

Yeah I can definitely see what you’re saying. I prefer iron spider over FF personally, but yeah FF shouldn’t be too far down the line. I guess bag man is after that? Maybe Amazing fantasy 15 design?
Top

I'm in agreement with that - I'd like to see new, dedicated figures of both Tobey and Andrew Spideys. Icons in their own right and deserving of figures, especially now. For my purposes they'd be going into a larger Spider-Verse, and it'd be great to have well made figures representing their corners of the multiverse.
Top

I’m sure the Spider-Verse aspect would potentially sell multiples of each. One for their respective movie villains, one for NWH, and one for a general Spider-Verse display.
Top

It would just be great to have decent non-bowlegged Tobey Spideys in the display. The ASM Garfield Legend hasn't aged well even with the relatively modern articulation. Imagine a figure with the slightly raised weblines and proportions of the Gamerverse Miles?! How amazing (pun) would that figure be?
Top

KEWOOSKI wrote: ↑
Sat Dec 04, 2021 5:40 pm
I would like to see a re-release of some of the earlier retro figures I missed: Pizza Spider-Man, Captain America, Black Panther, Wasp, etc.

I want full on redos of all of these figures (except Pizza Spidey. They already redid him last year, so they probably aren’t releasing that one again or remaking it. I think they will definitely rerelease last year’s retro version next year bough for his Anniversary)

Those Avengers figures are incredibly old and show their age. They just don’t look as good as the X-Men and Fantastic Four figures. Hopefully we will get new versions like we did with Hercules.

JPC wrote: ↑
Sat Dec 04, 2021 11:10 pm
When Hasbro has tried a new wave theme hasn't it been two years between a follow-up because they waited to see how the first was received? That's why Netflix Cage got punted to a two-pack (speculation) because it didn't do well? I think they had high hopes and decided to keep it going at Walgreens while they decide.

Not sure in general, but Age of he Apocalypse was released in back to back years.
Top

For Spider-Man, I want five figures and a BAF, and I'm good.

Doesn’t the Walmart/Toybiz Anniversary Cap count as a remake of that Captain America?
Top

Great list! I'd love to see all of those as well!

I'd also add these to my Spider-Man wish-list:
Chameleon [classic Steve Ditko era smoking jacket]
Doctor Octopus ["Death of Captain Stacy" suit and glasses, or white Armani suit]
Lizard [classic, with removable tail and alternate head, left hand and feet of Doctor Curt Connors and as a solo release rather than a Build-A-Figure]
Mysterio [classic, with alternate civilian heads of Quentin Beck and Daniel Berkhart]
Rhino [classic with a sneering head and alternate angry head, and as a Deluxe figure rather than a Build-A-Figure, please]
Calypso [classic]
The Rose [with alternate civilian heads like Richard Fisk and Jacob Conover]
Kaine [classic]
Stunner [classic red-and-black costume]
Delilah [classic]

I'd also love new figures of a new classic Black Cat, a classic Sandman on a bigger body mold in his green shirt with the thin black stripes, and Vulture and Electro in their costumes from Mark Millar's run of "Marvel Knights: Spider-Man". I know some fans want a young Vulture in his armored suit, but I never liked the young Vulture storyline from the '90s. A new armored Rhino from his '80s Sinister Syndicate era would be a cool figure too. And of course, I wouldn't mind new figures of characters like the Spot, the Trapster and Overdrive from "Superior Foes". Even a new, more John Romita Sr.-esque version of the Green Goblin with alternate heads of Norman and Harry Osborn and having the glider in its bat-wing shape like the Toy Biz figure would be great. And I could go on for quite a while on my "Spider-Man: The Animated Series" wish-list that I'd love to see Hasbro make.

Hasbro still has a lot of figures left to make in order for me to complete my Spider-Man collection, and I am 100% fine with that.
Top

If they ever do more House of X figures then I absolutely want the new Storm design. 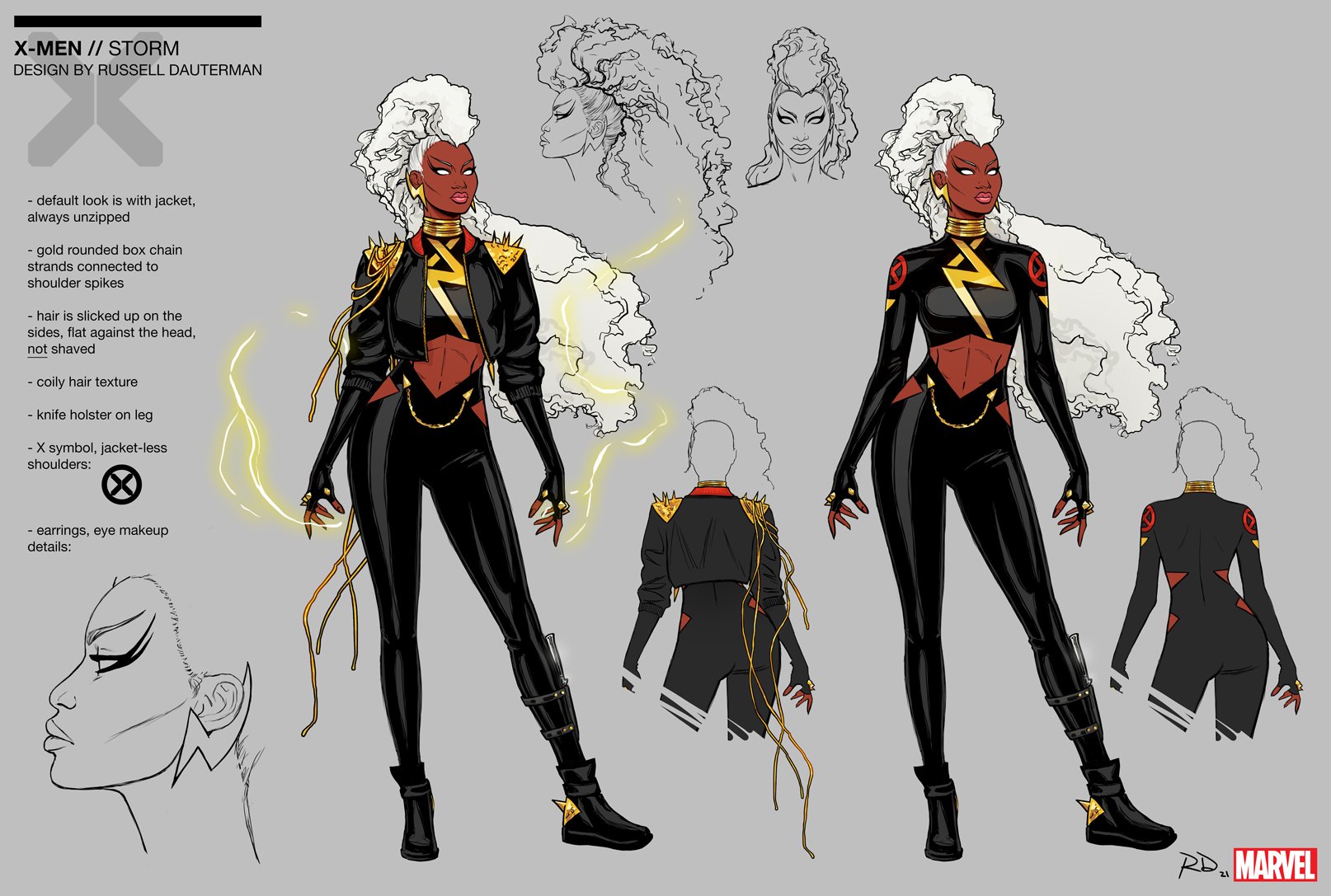