YO JOE! Whether it's the 6-inch Classified Series or 3.75 from various years, let's talk G.I.Joe!
Post Reply
818 posts

[email protected]#$ Hell! That was impressive. Congrats to all the backers.

Now imagine if Star Wars Black Series Haslabs were half this good. But hey, at least they give Target\Walmat\Walgreens\Whateverthefck another army builder trooper! I guess that counts for something...
Top

Yeah, another very, very bad look for the Star Wars team. Hard to believe Hasbro/Disney puts up with it.

Wasn't sure what to expect with the Hiss Tank but there's enough there to justify the $300 in my book. Especially if it's gonna start knocking out stretch goals like I think it is. The rear cargo bay is just awesome, too.

Hasbro can go months with no Haslabs in progress. I don't understand why they decide to run multiple ones at the same time. All it does is force the people that want both but can't afford both to choose between them. Perhaps some of the saber backers decided the HISS was more appealing.
Top

You have to see the video they have on the site for the HISS. its awesome, they got the backround music from the cartoon and CC's voice explaining the Haslab.
Im gonna be backing it but its gonna be in early Aug. by that time, i should have received my 2nd full check by then from my new job.

I've been trying to look for a pic in the web; What does the Cobra HISS Tactician look like?

Was there a version of him released in previous Joe lines? I can't seem to find what that trooper looks like

Mongoose wrote: ↑
Thu Jun 30, 2022 1:30 am
It's funny. Hasbro gives every other property sooo much attention. Multiple lines a year with multiple waves. They treat Joe as an afterthought most of the time. After the lightsaber campaign fails, 50% of Star Wars Haslabs go unfunded. The HISS blows all the other Haslabs out of the water in terms of time to funding. So yeah Hasbro, obviously there's NO market for Joe stuff. Continue to pump out hundreds of Star Wars and Transformers product every year.

Eh. The joe line gets plenty of attention I think. Trying being a fan of the Lightning Collection.

Um I think Hasbro's doing a pretty great job on the MMPR front. The only negative I have with them is the lack of paint apps of some figures and some wonky unmasked heads from time to time (both of the Kimberly head sculpts are unforgivable though).

But in just a few short years just for MMPR we got...


I think that's insanely impressive, especially not even factoring In Space which gave us our first ever Astronema.
Top

And even then the Marvel team isn't making the specific characters I want in the specific looks I want. Bastards.
Top

Was there a version of him released in previous Joe lines? I can't seem to find what that trooper looks like 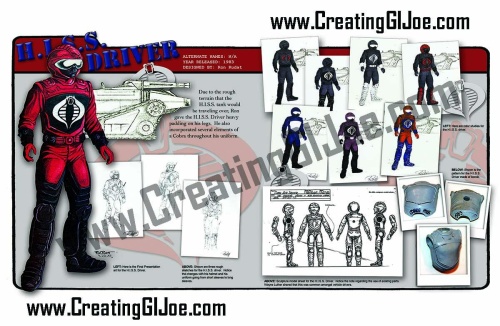 It should be a fan vote after the campaign for one of those color schemes on the right.
Top

It is madness how good this has turned out. From the HISS Tank being pretty damn outstanding to the super quick funding.

Hard to argue that GI Joe is not the hottest toy property at the moment. And with minimal supporting media.
Top

I'm really enjoying Classified, but I'm coming to the line as a fan of cool figures first with no attachment to GI Joe since I never had any as a kid (maybe one or two, but I couldn't remember who if my life depended on it!). As much as I'm enjoying the figures a gigantic goofy tank vehicle really does not fit into my collecting priorities, especially considering I'm not even *really* sure what my intentions are with this line. But damn if it won't be really, really difficult to stay out of this, especially as they reveal more tiers! So we've got the driver and the tactician early-bird special promised, and these missile launchers at 10k. What are the odds at least one more figure is included as a tier? Are there any named/non-generic characters that would make sense to come with the HISS?
Top

I have absolutely nowhere to put this and the shipping and taxes make this a considerable amount more than the $299 sticker price...

But damn, I really want it!

Very impressed with how quickly this funded and how the pace hasn't let down.
Top

Kudos to the Joe team, their passion, presentation & thought-out project won people over immediately & backing was there within hours.

Making Cobra Commander lead the promo video was a masterstroke too, him calling backers imbeciles had me rolling.

I don't have any GI Joe figures but I was tempted to back this for a minute, that's how good the Joe team is in winning people over.

The upcoming weeks will be very interesting for those who are getting the HISS Tank, Mythic Legions All Stars 5 wave & the Mezco PSCC.
Top

Has any other Haslab project fully funded in less than 24 hours? Genuinely asking, I have never followed any closely except Unicron and Star Saber, and much as I love them they certainly did not.
Top

The next 2 tiers will be bones and a cardboard backer, and so many people will be mad, it will be defunded.

Return to “The Pit: The Unofficial G.I.Joe Board”