Starting to think there might be another wave now. We know Phoebe exists, but no suggestion of how she's being released still. Might be an exclusive, I guess, but you'd expect that to launch the same time as the current six. No Pulse-Con set, though it's still possible she's in a two-pack like we would have maybe expected there, and it's being held back because it could contain a big spoiler...
But, without going into detail, based on the trailer, besides Rudd, it seems there's the possibility of more cheap/easy re-use in this line, and it'd seem odd not to include a main antagonist at all for the movie (I wouldn't consider Terror creatures 'main' antagonists, as they weren't for the first wave/movie).
Plus there's gotta be a 'Slimer' and his current analogue before they call it a day, surely?
I know the line obviously struggled last year at the height of Pandemic uncertainty, and a toy line without current supporting media is really difficult; but maybe now the movie's about to hit, it'll save these and we'll see a bit more.
Beginning to hope again we might get the significant film characters, at least. The Ghostbusters 2 four, Janine, Vigo, Janosz, the Scoleris... Don't need to go as deep as Walter Peck, personally, but if we got these, at least, it'd make the line have seemed worthwhile (though we'll obviously feel the loss of an Ecto-1, a character in itself, already offered for two other Hasbro lines now to scale with figures).
Hope they continue (and signs are better than last year in the UK, where a few are selling out this time).

(I wouldn't at all be surprised to see the initial four repainted 'Real Ghostbusters' style as a wave like the 'Slimed'/glow release, if the line continues. Possibly as a con thing.)
Top

Ah. Just seen that. The equivalent of $494 in the UK. Just before Christmas. While other Haslabs are bumping up against it. Are Hasbro completely unaware of the real world and how much cash people have when there's only just been the onset of a world-changer that's left many of their customers in terrible positions? They seem spectacularly, astoundingly out-of-touch. And, possibly, out-of-touch with their own departments within Hasbro, to attempt to cannibalise each other so blindly. Remarkable.
Top

Ah. Just seen that. The equivalent of $494 in the UK. Just before Christmas. While other Haslabs are bumping up against it. Are Hasbro completely unaware of the real world and how much cash people have when there's only just been the onset of a world-changer that's left many of their customers in terrible positions? They seem spectacularly, astoundingly out-of-touch. And, possibly, out-of-touch with their own departments within Hasbro, to attempt to cannibalise each other so blindly. Remarkable.

I'd already grown somewhat concerned as Haslabs seemed to run one after the other last year but wasn't too worried as I only backed Sentinel and figured if they spaced them out that way it'd be fine.

Now they've run multiple back to back that I wanted (Galactus and Victory Saber) and then dialed it up to 11 to drop all 3 of these at once which just seems...absurd? Baffling? Tone-deaf for sure. I don't collect 3.75 in Joes so that's fine I guess but putting people in a position to choose seems weird to me. I hope this doesn't become the norm.
Top

I’d like to see a video of the pack lights before jumping in. I’m currently building two hero-ish ‘84 packs, which is really my fourth and fifth builds. This definitely isn’t a need, but a fun bonus. Price is fair, I think it’ll get expensive on the secondary market based on HasLab‘a track record and how much Matty stuff still goes for.

The back side is the hardest thing to look at though; no Alice frame, the seams and fake hardware. Just sad.

And the timing is bad. I get synergy on the movie, but funding running through the movie opening is dicey. If it were to bomb like Answer the Call, I could see people hedging bets for Hasbro to do an OG pack HasLab (which is a gamble if this were to fail). Plus the holidays and two other HasLab campaigns…it’s a lot. But it’s also almost at 2000 backers, so it’s probably fine.
Top

I actually think the timing of this Haslab makes the most sense of the current load. Galactus makes some sense to tie in with the retro F4 wave, though that's supposed to be a year long anniversary sub-line, so could easily have launched with the next wave, presumably, but if not: at least that's only(!) two. But why Transformers, Joe and the Rancor had to be now seems utterly senseless.
I don't really doubt that any will meet their minimum- but the final numbers could unquestionably be higher, with more tiers met with certainty. With so much of everything already arriving at once, there's gonna be a massive number of potential Haslab sales, overall, that just can't be made.
Considering Hasbro is exactly the sort of business that talks a talk of 'brand synergy' and the like: what a poor strategy.
Top

They’re a third of the way there in 4 hours. I think it will be fine.
Top

Yeah as others have already stated....

A Haslab where you have to buy other items, already released at retail, to finish the product? That just seems to run counter to what a Haslab should be offering. Also this won't release for over a year so if you want the wand to finish the look you better get it now because who knows if Hasbro will have stock on the shelves a year from now. Or that they would be willing to re-release the wand, especially if the movie doesn't do that well, and product doesn't move. My belief is that they have to have a wand as a stretch goal right? I mean they can't possibly think this works without a wand, and that people would be happy about having to track one down a year from now. Since they already have the mold that is a savings for them, however it is an awfully expensive mold which makes it unlikely to be used as a stretch goal.

As for the backer count, it seems that Hasbro is experimenting with the Mattel method of crowd funding (WWE ring). They have a 48 hour window for Premium Members to back this, and if they do it in that time frame they will get an exclusive "goo/slime" set to drape over the Proton Pack. So that is probably contributing somewhat to the fast run up of backers. Get in early to get the "extra."
Top

This is the supposed breakdown for the stretch goals. Unsurprisingly, it’s not anything huge, like hoping for a trap or PKE meter.

The 48 hours thing is a bummer. I was definitely going to wait to back it, but I guess I’ll jump on early. (I know it doesn’t charge until the end of the campaign). 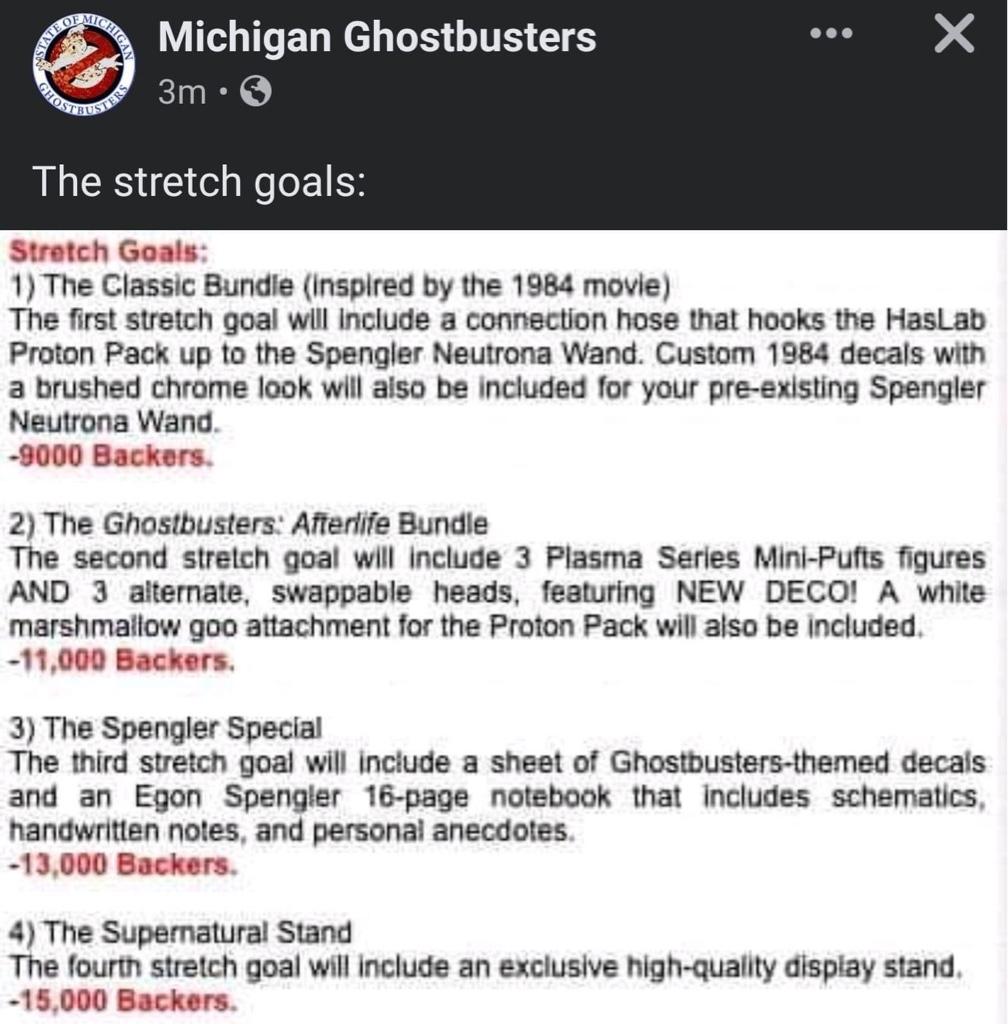 The tiers are pretty boring, but the overall project looks neat.

Making the first unlock the hose to connect a wand.... I don't really call that an "extra", but I am sure that unlock will be easily reached

Sent from my SM-G998U1 using Tapatalk

september_death wrote: ↑
Thu Oct 28, 2021 2:55 am
This is the supposed breakdown for the stretch goals. Unsurprisingly, it’s not anything huge, like hoping for a trap or PKE meter.

The 48 hours thing is a bummer. I was definitely going to wait to back it, but I guess I’ll jump on early. (I know it doesn’t charge until the end of the campaign).

Ah thanks for that. I hadn't seen a breakdown of what the backer goals included. As I feared nothing as substantial as another wand. Obviously that was too expensive, but a dream is a dream. The connector and stand are understandable. However it's funny because I guess Hasbro is going the opposite way in thinking than I am. They are trying to make those customers out there who have the wand already, bite on the Proton Pack with the attachment, stand, etc.

The Mini-Pufts are in line with other Haslab unlocks. Existing tooling from retail repurposed for the Haslab project with some changes. The white marshmallow goo is a nice add-on to give backers something if they don't get in early with the green goo/slime.

In the end though I am still disappointed that a wand isn't included in the project. Again it seems counter to the idea of a Haslab that you have to get a pretty integral part of the Haslab project through retail.
Top

It state you have to be a Premium Member both prior to purchase, and at the time of fulfillment.

So that means you have to stay a Premium Member for at least 2 years, possibly 3 depending on when your renewal falls. Probably makes no difference to those ordering in the first 48 hours, especially those in the US. However for those of us outside the US it might be a bit of a bigger pill to swallow.
Top

I don’t get the “no wand” complaints…
https://hasbropulse.com/products/ghostb ... ollectible
Top

Possibly because it's because people don't want to be forced to spend another $125 plus shipping for a wand that won't even match the 1984 (with the stretch goal tier 'decals') look because that wand is based on the "modifications" that are in universe to the new film?

It's quite simple "to get" why in my eyes.
Top

No wand AND no alice frame. The straps are mounted directly to the pack.


I STILL want Neca to do Ghostbusters right. Why wouldn't I? With the amount of detail, paint and accessories they add to their figures for such a good price, they would blow it out of the water.

Super 7's prices are absolutely insane. And I just bought my first... the iconic pose Conan, and I did really like it. But I only did it because there is basically no other Conan toys out there, and I really wanted one.

So I can imagine what a S7 GB line would look like... basically the Matty collector figures with slightly new sculpts, only this time each would be $55 bucks a pop. No thanks.

And there's only one retro style they could redo that's really important: 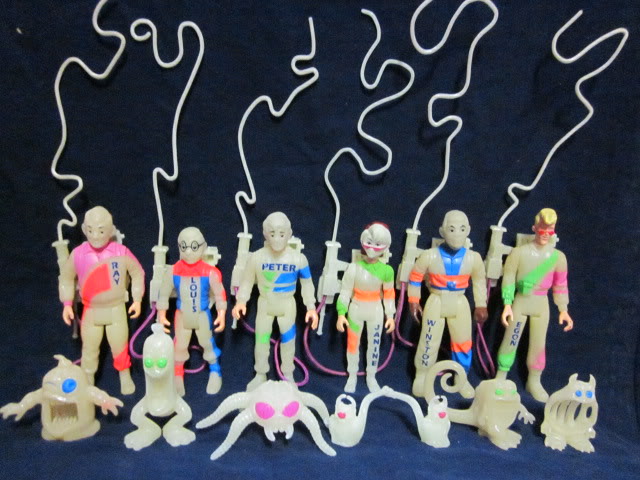 Possibly because it's because people don't want to be forced to spend another $125 plus shipping for a wand that won't even match the 1984 (with the stretch goal tier 'decals') look because that wand is based on the "modifications" that are in universe to the new film?

It's quite simple "to get" why in my eyes.