Sent from my SM-G975U using Tapatalk

I think many of you are overstating how many people dislike these two packs.
Top

SymbiSpidey wrote: ↑
Sat Jun 12, 2021 6:28 pm
Another 2-pack with a fan-favorite character and a repack that renders the previous release that just came out completely obsolete *sigh*

You've just verbalized exactly my overall issue with Hasbro lately: they are actively making their own products they *just* released obsolete while expecting me to pay for it.

This has always been the way of toy companies but Hasbro is doing it SO BLATANTLY and so quickly and prices have risen so much that it's actually killing my enthusiasm for the products I do buy, because I have a sneaking suspicion a better version is just a reveal away and my support was foolish.

I don't have a problem with re-releases in general. An upgrade after a few years? A re-release of a figure in high demand? No problem! That's answering the market and helping collectors. But this way? Is pure bullshit. And they keep doing it over and over and over...
Top

We knew it was coming.

The 'Lava Equinox' code leaked a while back. And it's an AMAZON Exclusive.


I sold off my Blue Astronema ages ago, it was an underwhelming figure. Hopefully this one is improved, but the Purple hair already makes it look like a cooler display piece. IMO her most recognizable look.

Inevitably, the Red-Hair version of (Cyborg) Astronema will be released in some form as well.

SymbiSpidey wrote: ↑
Sat Jun 12, 2021 6:28 pm
Another 2-pack with a fan-favorite character and a repack that renders the previous release that just came out completely obsolete *sigh*

You've just verbalized exactly my overall issue with Hasbro lately: they are actively making their own products they *just* released obsolete while expecting me to pay for it.

This has always been the way of toy companies but Hasbro is doing it SO BLATANTLY and so quickly and prices have risen so much that it's actually killing my enthusiasm for the products I do buy, because I have a sneaking suspicion a better version is just a reveal away and my support was foolish.

I don't have a problem with re-releases in general. An upgrade after a few years? A re-release of a figure in high demand? No problem! That's answering the market and helping collectors. But this way? Is pure bullshit. And they keep doing it over and over and over...

I picked up zedd first series because he seemed to be the one selling the most at the time and I didn’t want to miss him even though I wasn’t ready to get into this line. The Rita 2 pack just made me disinterested because they put him in there. And I did want Rita. But I felt ripped off by this tactic. I’m all for re releasing previous figures people missed and want but there has to be a better way that works for people who already got it.

But yes, I know, the answer to all is hasbro want money.
Top

If we taking votes, I'm against this Hasbro two pack re-release model in general. As a non-completionist, I have no problem skipping stuff and waiting for a sale. Sometimes I just skip it altogether like the Psycho pack. I have the red, blue and green Psychos and am content to leave it at that.

Regarding this new villain pack, I didn't get the first Astronema pack so this one appeals as long as it isn't priced crazy. If so, I'll wait for a sale. Nothing in yesterday's reveals interested me. 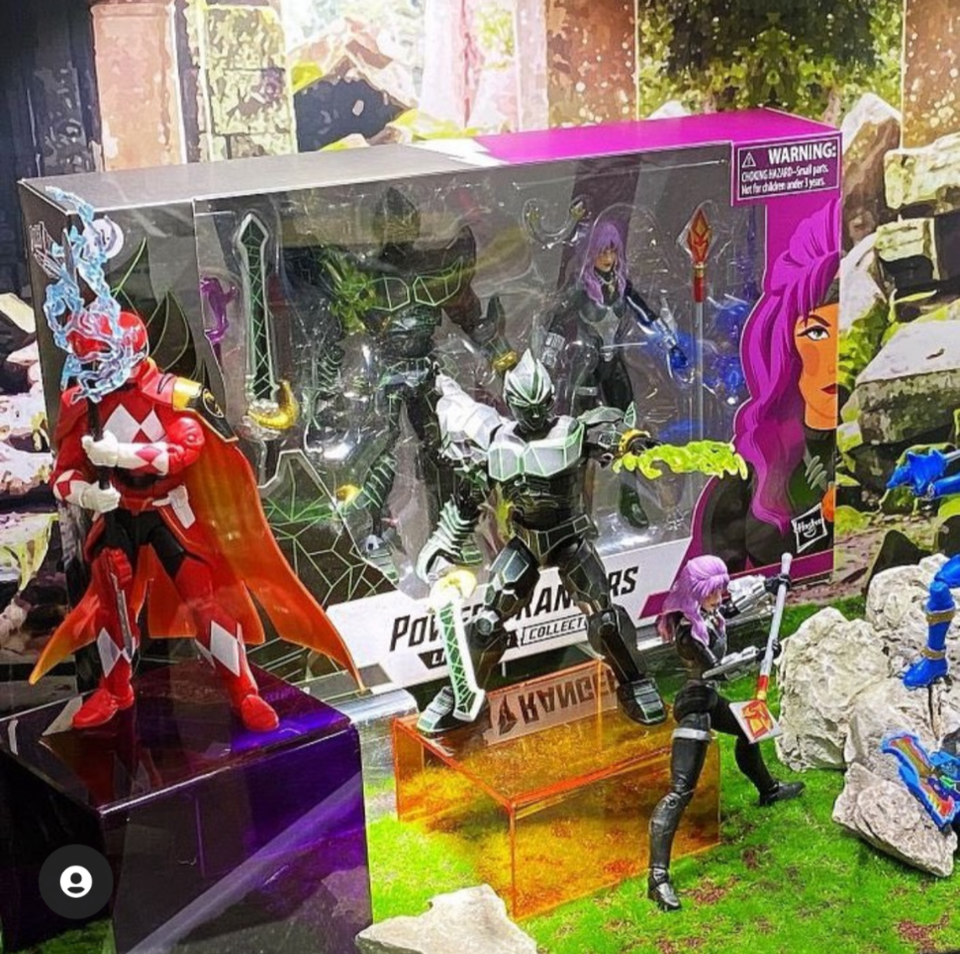 Whelp. Another figure I will have 2 of. Luckily, I love in space. And I liked Astronema. And Ecliptor. While not an ideal release, it makes sense. I'm honestly surprised this wasnt the first 2 pack with Astromema. Andros would've sold single packed. But this was probably their plan. And I agree, it is getting annoying. But if this is how the line survives and it gets me more rangers in the future, so be it. Ecliptor does look pretty great.

It would be nice if Hasbro's PR team could redo the head on Astronema to be slightly bigger. The head in the 2-pack is too small.

I found Lost Galaxy Blue, In Space Black at a Walmart and S.P.D. Green at a different Walmart today. I didn't see any Tenga Warriors.
Top

Ok so, I've read that some people found those 2 packs to be annoying.
I agree but sort of disagree also...
Here's the thing, I started this line when it basically started but I could never get an hand on Zedd (We get the short end of the stick in France and Belgium)
That 2pack with Rita became a must have because I would get her...but I would also get Zedd.

I also got that Dragon Shield Red Ranger and Zeo Gold 2 pack.
I was a bit pissed, but oddly enough not that much because I bought another Zeo Gold when it was released as a stand alone.
I passed on Lost Galaxy Red and the Psycho Ranger and to be honest I regretted it at the time : I'm now glad to have skipped that but damn it sucks when they don't give you his sword...What the hell?
We have several waves that are late in Europe so : Basically, the OG Pink Ranger is sold out almost everywhere. This pack is kind of great for people not being able to get the MMPR Pink at an affordable price, plus, it's Kat, not Kimberly.
I'm not counting the Candy MMPR Pink by the way...that one is just...just...nope.
This pack is giving me mixed feelings because I want Zeo Pink, I want Kat, but I'm not in a dire need of another MMPR Pink if the color issue isn't fixed.
But at the same time, having a non customized Pink can be a good idea to have since I've customized mine so I could use SH Figuarts Sentai's hands...

There's another pack that is pissing me off and that's the MMPR Yellow with Scorpina...I don't get that choice. I don't want another MMPR Yellow...but I want Scorpina, so I'm gonna pass on that and wait for a possible standalone that will probably never come out...

There are some problems with this line tbh and one that bothers me to no end...is that they DIDN'T finish the BM team. We are 2 members short dammit. I want Roxy and Zoey! Please give us more female characters...

Also, for the 3 female bodies they have...they all have some problems and why not giving double jointed elbow for females, that's nonsense...And it's on all their lines.

This is my only concern with the two-pack, the potential pricing hike; 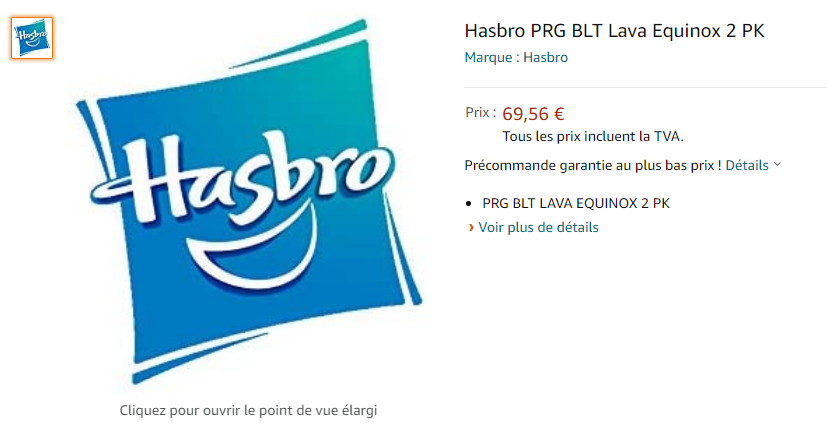 I recently rewatched a few seasons and I got to see Astronema/Karone again - she may well have the best arc in PR history. I also forgot how gorgeous the performer is. Hope we see Ranger Karone in the near future.

Because I saw it so recently - I noticed she wore the Blue hair a lot, but both looks appeared in significant episode arcs for her. Looking forward to having another version (and prefer this less bulky body suit).

Ecliptor looks fantastic and they are def an awesome duo for a 2-pack. Super happy to see him as he's such an important part of her storyline.
Top

I have been resisting with all my might diving into Space Ranger figures. I did like the series, it's the last PR series that I stuck with all the way through, I just thought I needed to draw the line at MMPR and Zeo related stuff. This Ecliptor 2 pack is looking awesome, and like everyone else, I really loved both him and Astronema in the show. I don't know if I'm going to be able to resist.
Top

K_Steel wrote:This is my only concern with the two-pack, the potential pricing hike;

I can see a $50 price tag on it. Consider Ecliptor a deluxe like the Monsters even though hes a little smaller. But hes a unique mold that will probably have little to no reuse. And then the repacked/repainted Astornema. But there is not way its gonna be $80. *If*, and that's a big *if*, this set is $80 when its released, it won't sell. There will be a huge backlash. This isn't Star Wars, people won't pay $40 for a repaint with a new package for Power Rangers. I expect the cell shaded Kim to do poorly as well. Mainly for the price. So it'll hit a sale price. But, a sale price for an $80 set may not even go down to $50. I don't think Amazon or Hasbro are *that* dumb.

Now if this ends up being the comicon set which, it could, but I highly doubt, as its rumored to be Amazon, they could price hike it to $80. And people may pay that for a comicon set. Begrudgingly. But those don't see as wide a release and almost never go on sale. Almost all Amazon exclusives go on sale at some point, with only a couple exceptions I've seen, and those weren't power rangers.

Maybe that listing isn't for the Ecliptor set? I don't know why it wouldn't be. But it would be almost figure suicide to make it that high. I don't even think Bezos himself would pay that price. And hes paying to go to space. Could just be a placeholder listing? I'm not exactly sure. But, this shit can't be that high. Not in this reality.

I watched religiously through Lost Galaxy and fell off a bit till Dino Thunder and then went back and watched everything I missed. I enjoyed almost everything, to varying degrees. So I definitely want at least all the first teams complete. But I'm in for almost everything. I'm just skipping A Sqaud, cause they're ****in stupid. No alt heads, were in maybe 3 or 4 episodes, and the exclusive pricing. If they go on sale for like $15 each maybe. But I'll be fine without them. I'm buying pretty much everything else though lol.

Well. On one hand, I was really hoping we’d get Ecliptor eventually and here he is and he looks great.

On the other hand, I hate these two packs. I just got Andros/Astronema a month or two ago. I guess she can join Zedd and the upcoming pink MMPR in my drawer of figures I don’t want and can’t sell.

Inevitably, the Red-Hair version of (Cyborg) Astronema will be released in some form as well.