WHO YA GONNA CALL? YO JOE! - Back to the Future, Ghostbusters, GI Joe, and WWE - it's all in here!
Post Reply
48 posts

Bought the Figuarts Lightyear and if you need some enemies for him to display with, the 10 inch Zurg and accompanying Zyclopses are definitely your best options, even if Zurg isn't to scale. 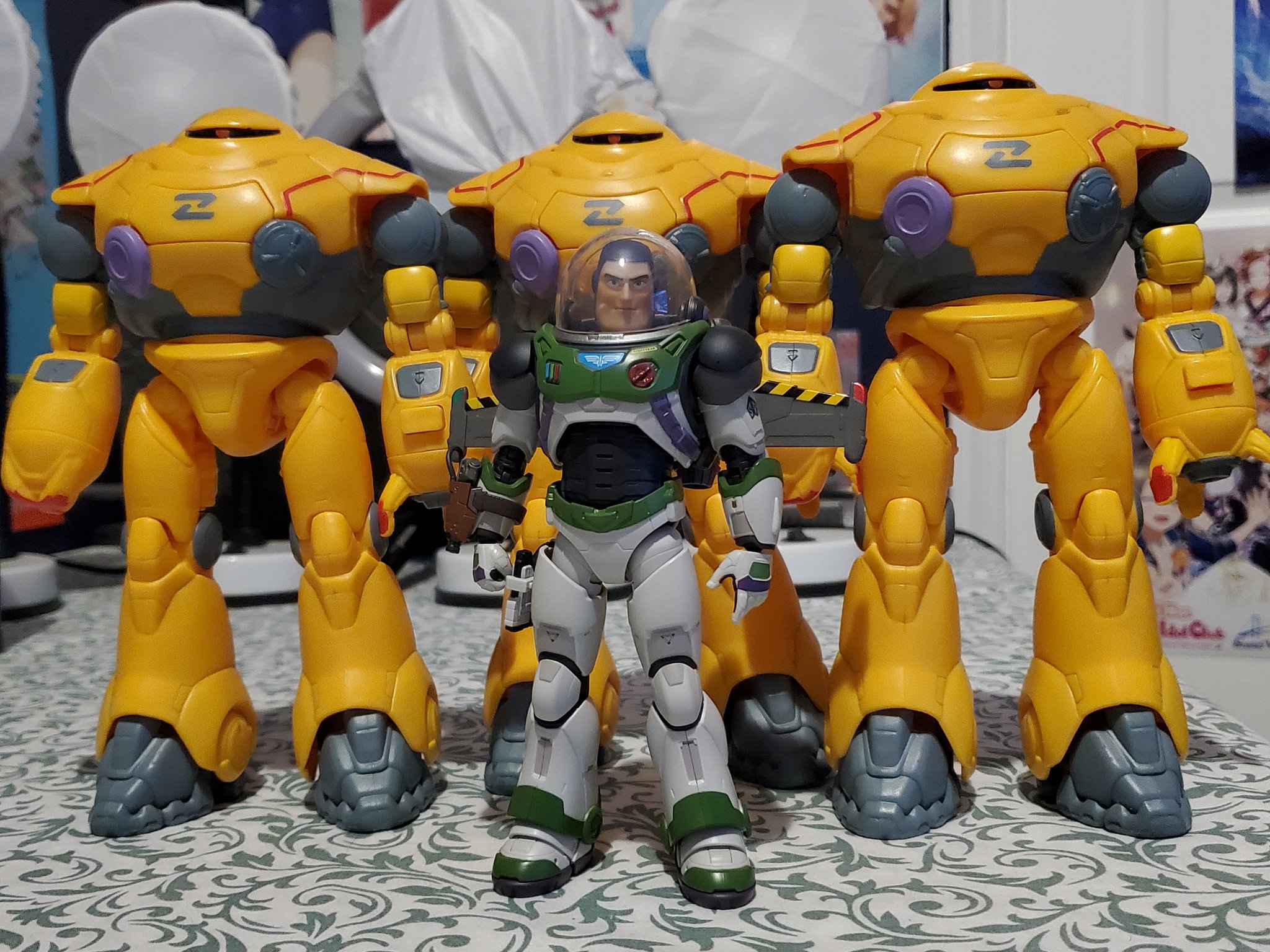 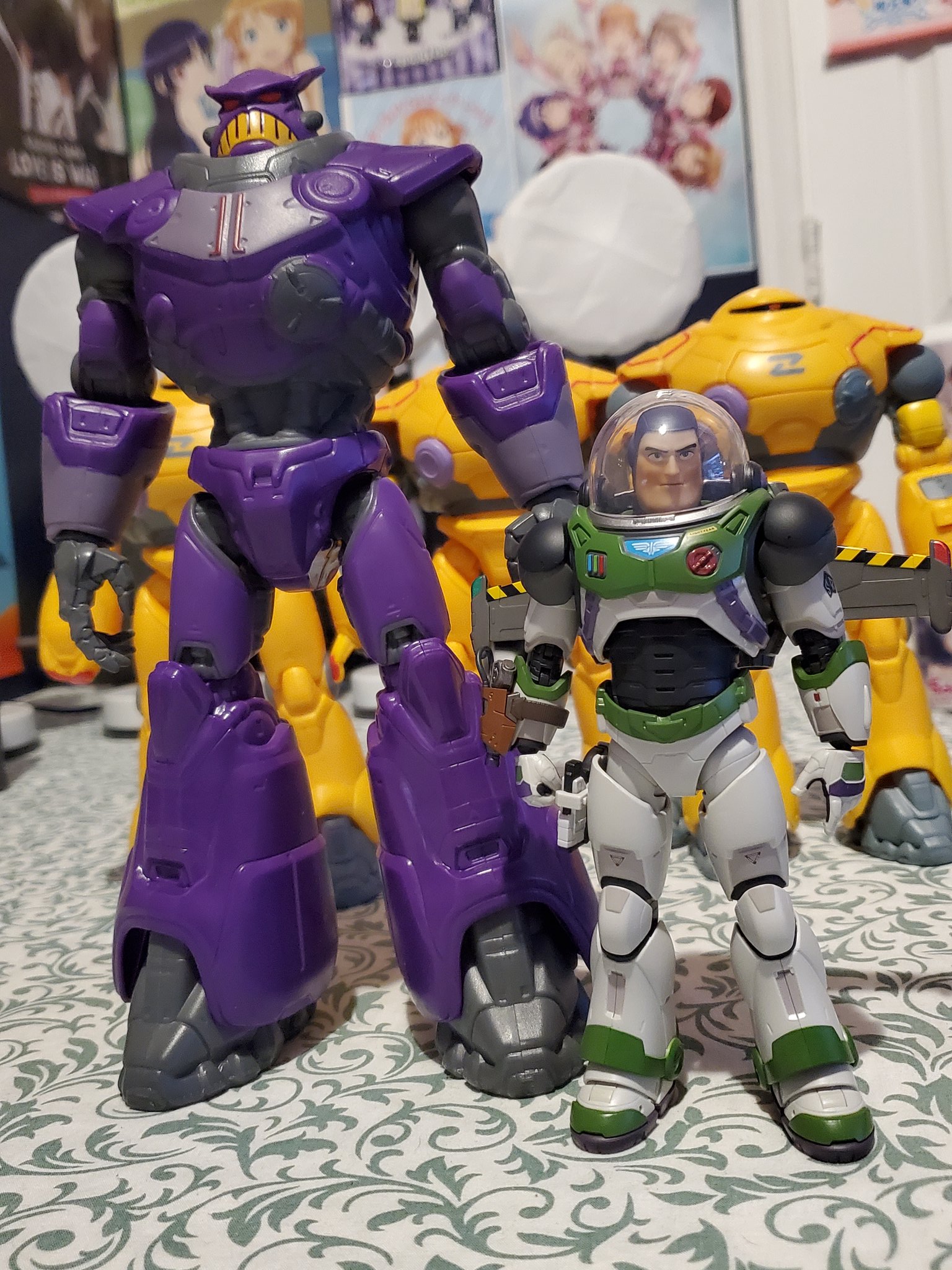 Still trying to track down any of the Alpha Class figures other than Buzz. None of the stores around me have carried much in the way of any of the lines other than the 5 inch line (and I'm sure I know why). Had no idea about the Alpha Class Zurg until I checked the Disney Store app a few weeks ago. Debating to get him, but I don't know how different he is from the basic line's version, other than maybe being a bit bigger and with a better paint scheme.

Saw a quick video on YouTube with a blurry photo of Space Ranger versions of Izzy, Mo, and Darby. Can't remember if they were Alpha Class or not, but either way, it's nice to see there's still some life left in the line, even with the movie not doing well at the box office. The toys are selling pretty well, at least in the stores I visit. Hopefully now that it's hit Disney Plus and more people are seeing it, they'll see its appeal.
Top

Amazon has 2 of the 3 others, as I've had them saved in a list for a bit, just haven't bought them yet.
Top

Found a swath of Alpha Class Buzz, Izzy, Darby, and Zurg at my local Disney Store here in NY. Snagged Izzy and Darby, but left Zurg- it's essentially the same figure we've seen released a few times, just scaled differently, and with some new paint/deco apps and a new arm gun. He looked really nice, and it would be nice to have one in-scale with the Alpha Class figures, but at $40, I left him. Had they had Mo as well, who I'm still missing, I probably would've snagged him to complete the set. He's up on Shop Disney, and if he ever goes on sale, I'll probably grab him then.

Izzy and Darby are really nice, though. I really like their cadet uniforms, and I'm glad they're the ones we got first in the line, since there's less part re-use, and the colors are a lot more vibrant. Darby had some loose joints in her legs, but can still stand just fine, even with her big gun. I like the how they implemented Izzy's gun as well; it's a small nit, but I always hate it when figures come with a cool looking gun, and then can barely hold it. I like the helmets they come with, but will probably never display them with them on. I just really like the look/style of the movie if nothing else.

As for the supposed upcoming wave of Alpha Class (space ranger suit Izzy, Darby, and Mo), I do hope we see them released here in the states. Not sure how well the line is selling, but it would be nice to get the little pistols they use, and it looks like Darby comes with one of the bugs, and Izzy with a fully standing Sox. For reference (it's a blurry photo of a still image that's watermarked to hell, which generally isn't a good sign, but you never know)-

My kids picked out a few figures from this movie. These are fun figures! The big Cyclops robot and Zurg have some great size. Zurg is as tall as Marvel Select Titanium Man! Decent articulation as well.

I found the 5-inch scale XL-01 spaceship at Walmart, the "in-store availability" look up seems to be working for this item. https://www.walmart.com/ip/seort/329122862
Top

Looks like we're going to get ERIC in the 5 inch line, Walmart exclusive 2 pack with repacked XL-01 Buzz. https://www.youtube.com/watch?v=GgR9y3vdGVs
Top

Nice! I'm not holding my breath, but I hope that means a DERIC is coming too, especially for Alpha Class. I know he wasn't in it much, but his little ongoing joke really tickled me.
Top

I just ordered all 3 of the remaining Alpha Class Lightyear figures from the Disney online store.
Top

This line is amazing. I found the XL-01 ship at Walmart the other day, might go back on payday. I still need the ground vehicle and the Armadillo too. The new figures look so cool, this is such a fun line and hopefully my son will want to play with me when he is old enough, as all of these figures will make a great space battle.
Top

Got Alpha Class Mo and Zurg from ShopDisney. Kept telling myself I didn't need Zurg, since I had the cheaper, smaller one, but I don't regret getting this. While basically just a scaled up version of the smaller one, the paint looks great, and the blaster is better implemented for a more "collector-based" figure. The articulation is still a bit lackluster, but overall it's still an improvement in my eyes.

Mo is pretty good too. My least favorite of the 3 recruits, probably, but strangely the hardest to find in the Disney Store by me. Still, he's a welcome addition, and got some nice paint apps. Happy to have the full line so far. With the movie underperforming, who knows if we'll end up getting the Alpha Class wave on the back of Zurg's box- the recruits in their Space Ranger suits. I'd happily snag them if they ever came out (especially Darby, since she comes with one of the alien bugs), but their cadet suits are my favorite and the more visually distinct of the 2 designs anyway. Would probably have preferred a DERIC too, but I get that he's not quite as visually appealing as a toy.

I've been tempted to pick up the 5 inch figures, if only because the roster is going a bit deeper. I like the more premium feel/apps on the Alpha Class, but the smaller figures look good too, especially alongside the vehicles. Maybe if there's ever a good sale where I could pick up most in one fell swoop.
Top

joshsquash729 wrote: ↑
Sat Sep 17, 2022 3:59 pm
I've been tempted to pick up the 5 inch figures, if only because the roster is going a bit deeper. I like the more premium feel/apps on the Alpha Class, but the smaller figures look good too, especially alongside the vehicles. Maybe if there's ever a good sale where I could pick up most in one fell swoop.

Target just recently had a sale on the 5 inch figures for $8, I think, but I'm guessing they'll go on sale again or be clearanced out before the end of the year.
Top

Dan the Pixar Fan revealed in his XL-15 review that we're going to be getting Buzz in his updated suit, looks like it might be coming with the XL-14.
Top

XL-15 is available as Crystal Grade from Walmart, or from the normal "wave 2".

XL-07 Buzz is supposed to come with that ship, whenever it's released.

I think you've called out the rest I'm aware of, though.
Top
Post Reply
48 posts