What are you reading?

I will get that recommendation KD but perhaps everyone is trying to catch up on some backlog. I know I am.
Reread Lemire's Essex County yesterday ( just grabbed a light book to dive into on a lake trip) and it's still solid.

Outta space on figs and outta space for books don't want another shelf. Dreading i might be forged to purge. Bah.
Top

lefthook wrote: I will get that recommendation KD but perhaps everyone is trying to catch up on some backlog. I know I am.

I think I'm still getting used to the idea that a lot of people aren't reading a whole stack every Wednesday evening anymore. Most people seem to be waiting for collected issues these days, or waiting for a bunch of issues to drop and reading them together on Marvel Unlimited or something. I imagine it's easier for me because there's actually very few titles I'm still actively following. I've dropped 90% over the last several months.

Although I'm considering starting Invincible from the beginning. I read the comics a ways back but I lost interest. The show reminded me that it really is a good story and might be fun to get back into.
Top

I've purchased somewhere around 12-14 Marvel Omnibus since COVID hit. I've read maybe 2 so far. I have some reading to do.

Sent from my SM-G975U using Tapatalk

I'm building up my collection of Marvel Epic Collections. I'm loving this style of collected format. I just won a few auctions. I'll now have every X-Men epic collection released so far. I have all of X-Force, all of X-Factor, all of New Mutants. I still need the first two volumes of Excalibur. The other two titles I'm collecting are FF and Spider-man. I have about half of the FF books and four of the Spider-man books so far. I've been trying to find deals whenever I can on the books, that's helped build the collection. Spider-man is definitely going to take some time...and I may have to wait for re-releases on some of these books.
Top

Has anyone started reading We Only Find Them When They're Dead? Just finished the first issue and liked it quite a bit. Seems like it could be interesting.

Also, with the rerelease of the Inferno omnibus and the release of X-Men Masterworks 13, my X-Men collection is basically complete. I still have the next Wolvie omnibus on order and may track down other books if I really enjoy them, but I now have the "full story" through Age of Apocalypse. Morrison, Whedon, and Aaron are my favorite post-AoA runs; I'm not interested in Onslaught or House of M, so it's possible I'm done buying X-Men books, at this point? 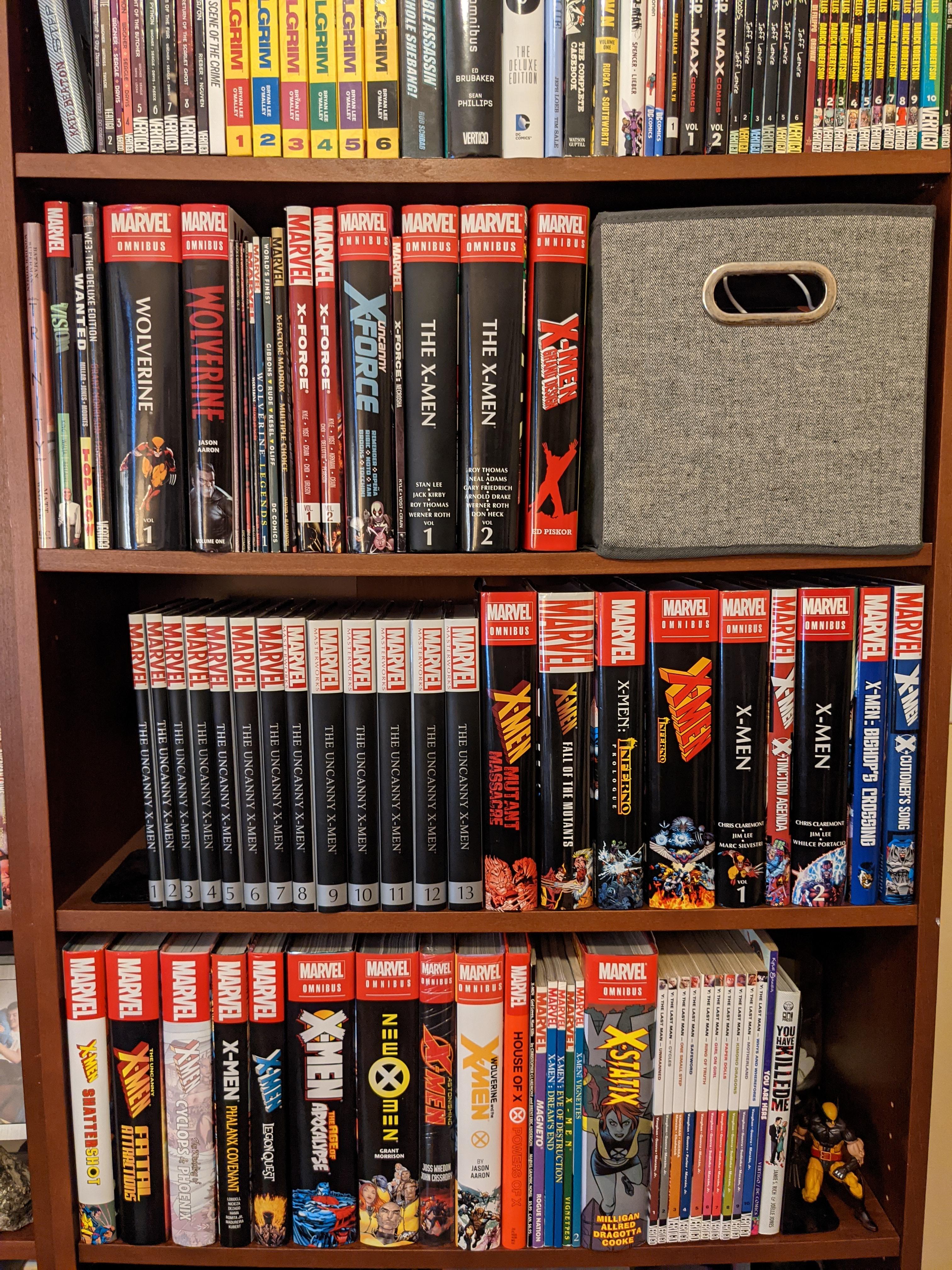 Those are some well-curated shelves. They look beautiful together.

I've never read Aaron's X-Men. I like his Thor run enough, so I guess I'll have to add it to my list. I'm always in the market for great X-Men stories that I haven't read.
Top

It's a generally fun book; I think the second half suffers from crossover fatigue, but I think that Marvel, in general, is too crossover heavy and a lot of really good books suffer from being forced into them.
Top

Have you seen the Chris Claremont X-Men documentary? It's streaming for free on Prime right now. The editing is shoddy and the production values are pretty low, but there's some good insight into the creative process of that era. Claremont, Louise Simonson, and Ann Nocenti are all candid about Marvel's editorial process and their eventual fallout with the company. Seems like a lot of it came down to Marvel's demand to commercialize more and more X-books and crossover fatigue.

I was surprised to learn that Jim Lee and Claremont butted heads, but it's kind of obvious in retrospect. Claremont left the 1991 X-Men series almost immediately. I know Lee as an iconic artist and an affable executive at DC. I didn't realize he had that history.

If you haven't seen it, it'd probably be interesting context. I know you were working your way through (or completed?) a full X-read.
Top

Been Using the Marvel App for Comics. Great value. Might start selling down my physical books...

I'll have to check that out!

I've met Claremont and I got to see him speak at Columbia when he donated a bunch of his materials to their archives. It was really interesting, and, while he speaks fondly of his time on the book and those years at Marvel, he also doesn't make any secret of his falling out with editorial (and it doesn't take a lot of digging around to figure out he's probably talking about Bob Harris) over the direction of the book and changes to how they handled plotting. He didn't talk about Lee specifically, but he did talk about his frustrations with crossovers, with being forced to bring dead characters back, and with the way that editorial started taking scripting/plotting away from him, etc.

I was just reading, recently, about the friction between Claremont and Lee; Harris (and Marvel, in general) was really trying to get and keep hot artists like Lee, because they were seen as guaranteed sales boosters. To try to keep him happy, Lee was given increasing control over the title, including, eventually, veto power over plot lines. After almost two decades writing the title, it's not a big surprise that Claremont was frustrated by this turn of events, and eventually quit. John Byrne was brought in to help with writing after Claremont's departure, but he lasted only a handful of issues before he, too, quit in frustration of how poorly the scripting/plotting/writing was being handled. It sounds like most of their frustration was really about the way that editorial handled things, rather than Lee, specifically (Claremont later worked with Lee on Wild C.A.T.S. after Lee left Marvel, so it doesn't seem like they have any particular animosity toward each other). And, of course, Lee would leave shortly after that, as well, to jump on at Image.
Top

That sounds interesting...and it also once again sounds like the case of upper management getting in the way of creators. Claremont produced an amazing run on X-Men....just get out of his way and let him do his thing.

I too read digitally but there's just something nice about having the book in hand. And I'm a sucker for how it looks on the shelf.
Top

Yea, I agree. I picked up House of X in physical. I just dont have the room or budget to collect more stuff I'll only read once. The App at $60 for the year is a crazy deal.

If you spent $80, which I did not, you got a special edition Marvel Legends Marvel Girl and some swag.

Plus its fun to send a comic to my Big screen and read it on tv while sitting in a nice club chair.
Top
Post Reply
58 posts