F-TEAM! ASSEMBLE! Doo doo doo dum dum! - Not all toy topics can be assigned a famous block. Talk about the rest of the toy lines here!
Post Reply
3778 posts

Dick Tracy looks incredible and for $90-ish I would've likely pre-ordered him... but at $200 and with Flattop, who I'm not really interested in, I think I'll pass for now. If it's still available for pre-order in a few months on BBTS I'll probably order one, right now I'm spread a bit thin.
Top

I've been waiting for this release. I thought they forgot about Dick Tracy and Flattop. So, glad to have been able to order this set. Aside from Dr. Strange these are the only Mezco figures I will have, but serious Dick Tracy fan.
Top

Mister Voorhees wrote: ↑
Wed Dec 07, 2022 11:55 pm
Dick Tracy looks incredible and for $90-ish I would've likely pre-ordered him... but at $200 and with Flattop, who I'm not really interested in, I think I'll pass for now. If it's still available for pre-order in a few months on BBTS I'll probably order one, right now I'm spread a bit thin.

VeeBee
Yeah, I was in the s#!%
Contact:
Contact VeeBee
Website AOL
TheFwoosh.com rules: Yes
Location: Never in my wildest imagination did I ever dream I would have ninjas like these.
Posts: 21774
Joined: Wed Feb 18, 2004 5:38 pm

Tracy is awesome but Flattop is the best part of the set.
Top

Not really a Dick Tracy guy, so I'll be passing on these, but they look really cool.
Top

I'm genuinely kind of cranky, and bummed out, that this is a two pack.

I only want Dick Tracy. And he looks great. But now I might not buy at all, because I don't want Flattop, and even if I want to go through the effort of trying to sell him, I feel like demand for a secondhand Flattop flying solo will be low.

Even if I think the accessories are worth keeping, that's still a lot of extra money I don't want to spend.

I ultimately didn't buy the blue golden age Batman because it too was stuck in a two pack. Probably pass on this set in the end, but I guess I'll chew on it for a bit.

Sorry for the negativity.
Top

I'll never understand the collectors that want the hero but not the villain. Makes no sense to me.
Top

cinemaodyssey wrote: ↑
Thu Dec 08, 2022 5:30 am
I'll never understand the collectors that want the hero but not the villain. Makes no sense to me.

Well there are variables man, it's not a black or white thing. So, speaking for myself:

For one, I'm not a Dick Tracy superfan. I like the character, and what I've read of the strips, and the movie, and all that jazz. But I'm not hugely attached to the franchise. So I want the lead character as a toy, but I don't need a line. I'm not saying it shouldn't exist, just that I wouldn't buy it.

I also buy and love plenty of villains for different franchises. There are a handful of lines out there with few or even no villains where I really wish I had some.

As for Flattop, he's not *the* villain, he's *a* villain. I know that probably comes off as pedantic, but really, Tracy can be paired (if he must be paired) with a huge number of other toys in a display and still look good. Back when Mezco was putting out the Popeye figures, I bought the Popeye and Bluto two pack, because I do like Bluto, and the two characters are kind of inseparable. I would have been ok with just Popeye, but once Bluto became an option I felt he couldn't be skipped. Tracy has a huge list of gangsters he could have been paired with, so Flattop just isn't critical to me. Although I'm sure superfans feel differently, Veebee already said that Flattop was the highlight for him, so I get it.

But my point is I honestly don't think Tracy must be paired up with anybody. This figure looks great and will absolutely cut a really cool silhouette on the shelf all by himself.

Which leads to the price. It's much harder to swallow a character I don't want at a Mezco price. If this were say, a Neca two pack for 50-60 bucks, I would have bought it and never said a word about it. And I'm not saying Mezco isn't worth their prices or whatever, that's not the point, just that it's hard for me personally to justify in this specific case.

Ultimately this makes me wonder if Mezco intends to make a line out of this, or if this two pack is all the Dick Tracy product they're ever going to make. Because if it's the former, then they could have sold these characters separately right?

Anyway, sorry for the long post. I hope that makes a bit more sense at least.
Top

If it helps, demand for Flattop might be low, but demand for a suited Mezco body is never low in custom land.
Top

Figures should be able to stand on their own. I have lines I collect, and I also have characters. I have a MAFEX Hush Batman and I have no intention of getting any other figures from that line to pair him with because they're not going to add much enjoyment to what I'm already getting out of my lone figure. Dick Tracy is definitely a character that can stand on his own so I don't think anybody needs to justify why they would be content with Tracy on his lonesome and not be forced to sink another 100 bucks into a figure that won't bring them 100 dollars worth of enjoyment. And there are probably a lot of Dick Tracy fans out there only interested in just the detective, otherwise Mezco would sell Flattop on his own. Instead, they're using Tracy to carry Flattop. It will please those who are interested in a full rogue's gallery for Tracy, but for those who just wanted to be one and done it's a legitimate barrier. And for Mezco, they're likely happy as this set will probably sell through and they don't have to worry about retailers selling Flattop on clearance years from now.
Top

I generally like to pair a hero with a villain, especially for comic characters. My only two Star Wars figures are Luke and Darth. But there are others, like Master Chief, Neo from The Matrix, The Terminator, Hellboy, etc. where I feel the main character is enough to convey my love of the series/character. I have limited space, so not everyone gets their Joker.
Top

I can remember always reading the Sunday comics, Dick Tracy is a hallmark of my childhood in that regard. Do I need a $200 collectible? Not really but Mezco is bringing the LOVE with this set. I’m down for one and here’s my thoughts- Gaslight Joker head on that Flattop buck, and if you take off the trench coat that Dick Tracy buck just needs a Clark Kent headsculpt and BOOM. Classic. I’m in for all the options.
Top

TheSameIdiot wrote:I generally like to pair a hero with a villain, especially for comic characters. My only two Star Wars figures are Luke and Darth. But there are others, like Master Chief, Neo from The Matrix, The Terminator, Hellboy, etc. where I feel the main character is enough to convey my love of the series/character. I have limited space, so not everyone gets their Joker.

Sent from my Pixel 6a using Tapatalk

But I love the Tracy figure so much I'm willing to get Flattop, too. I'd probably rather just have Tracy, but with the pair, I'm now on the hook if they ever make a Pruneface or the Brow...

It took 90 years, but we're finally getting the first good Dick Tracy action figure. Can't pass it up!

Agree with the Batman 89 and also the DT set. Can't pass it up.

Where is BATMAN 89' MEZCO? Pre-ordered back in Jan 2020 still waiting.

Tracy without the coat reminds me of an older BTAS-esque Bruce Wayne, but also P. Warburton. 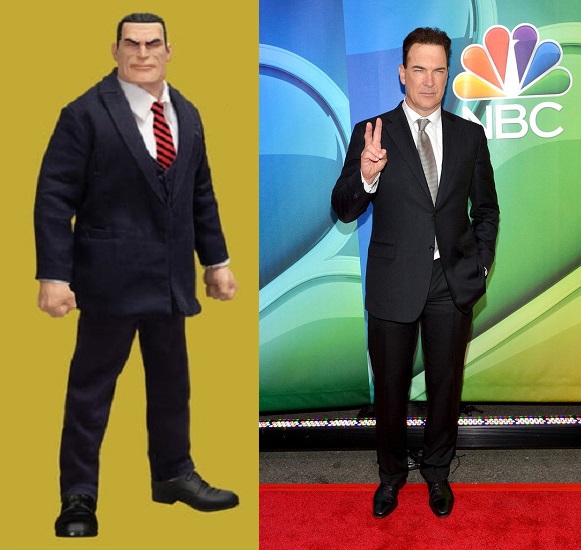