MAY THE TOYS BE WITH YOU! - Star Wars Black series both 6 inch and 3 and 3/4, vintage, POTF2, whatever! If it's a toy related to Star Wars then come talk about it!
Post Reply
9990 posts

I don't wanna be that guy, but I think racism has a part in it. Look what the toxic ass fan base did to the actress who played Reva, as well as Rose from the sequel trilogy. I mean, that's not 100% the cause, but I believe it adds to it. 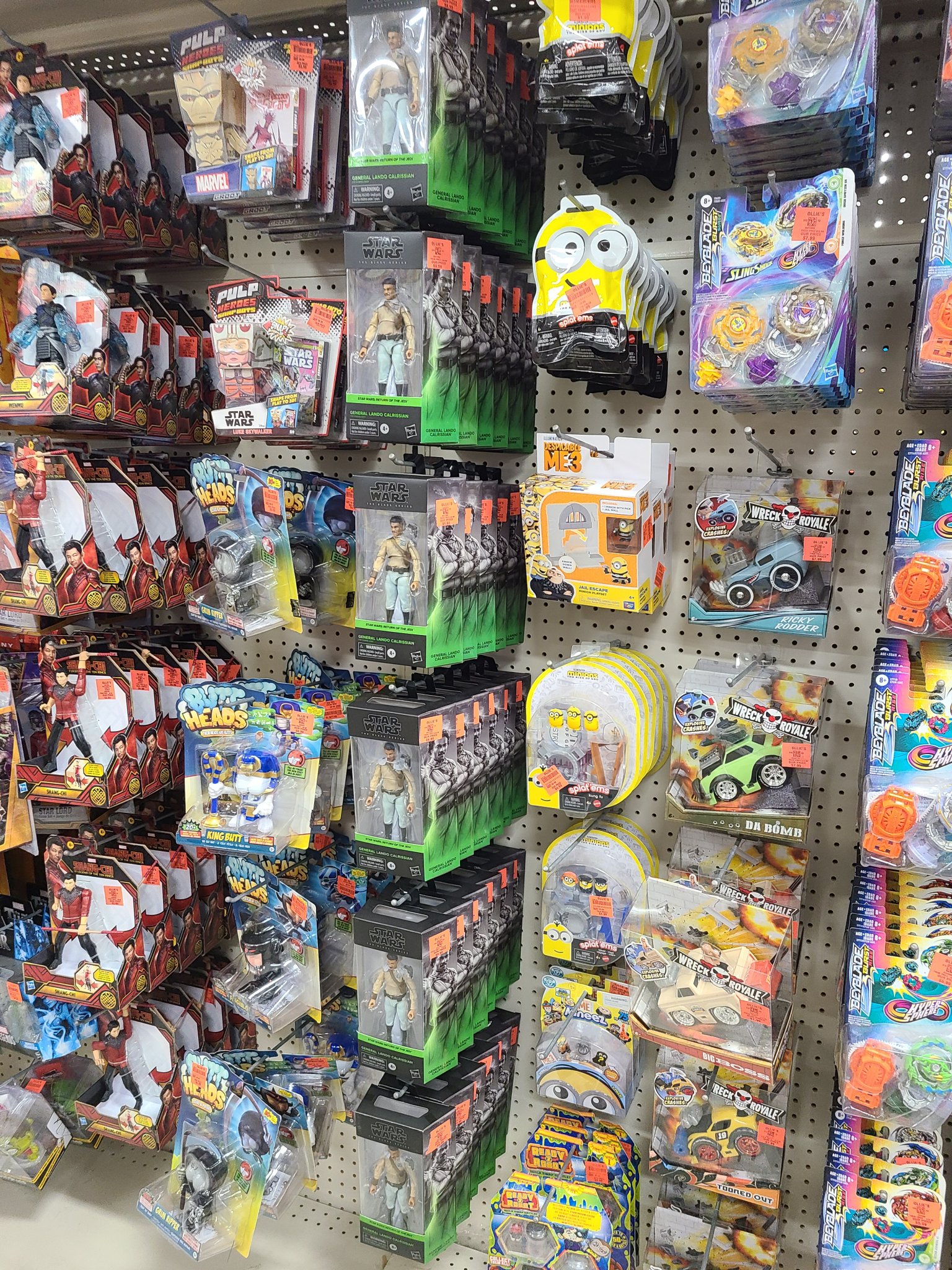 I need this explained to me. Why is Lando in such a supply everywhere? This not a pegwarmer thing, it's a why did they make so many of him? He was released in solid cases here in Australia. Same with Bo Katan.

There's also a massive clog of Rampart at EB Games/Zing here. They just keep stocking him and he's been on sale multiple times (original RRP was $45, he's down to $9). Why does this occur? It can't be just an issue of them being lesser desired, it really seems like too many of particular figures are made. There's plenty of figures that aren't high demand but are just never available.

Is there just an order of Black Series figures put in and the factory pumps out whatever they can? In this case, they pushed the Lando button to fill the orders??
Top

I don't know all of the factors at play with Lando here, but I believe he was a double packed figure in that case assortment for some reason. Also, many Target stores around here received solid cases of just General Lando and nobody else from the wave. This may have been Target's fault for ordering that way, but it was a very poor decision.
Top

Lando is king of the peg warmers. He rules both the black series and vintage pegs from Salem, Oregon to Stockton, California. Yup that's all I saw on vacation last week. I like Lando, but I only need one of each version. Way over produced by Hasbro.
Top

MarvelLegendsMan wrote: ↑
Thu Jun 23, 2022 1:43 am
Extremely disappointed by the show, and considering canceling my Target exclusive Obi-Wan (didn't pre-order the Wandering Jedi version; keeping my Grand Inquisitor and 5th Brother pre-orders because Rebels). But I will admit that I would gladly pre-order

Spoiler! :
Battle damaged Vader
despite how deeply I disliked virtually everything about the show besides that one scene.


Sent from my SM-G950U using Tapatalk

If your skillset allows; there's a custom head out there - https://scoundrelsstock.bigcartel.com/product/k-vdr
Top

Honestly, I don't think that's it, since characters like Moff Gideon sold through, and even the Glover version of Lando from Solo didn't warm pegs. I think it comes down to full cases of him being shipped to stores, and the demand just not being there for him in his less iconic look. Yeah, there were some peg warmers of Lando when the Empire Anniversary wave came out, but I think that really had a lot to do with it not being all that long since his regular release in the Black Series. I even hesitated on snagging him again, even though he was clearly an upgrade with the face printing (ultimately, I caved, but I think some people didn't. Some said they swapped their Skiff Guard Lando head with the original Bespin Lando, because they planned to only display Skiff Guard with his helmet on).

There are some horrible folks in the fandom, don't get me wrong, but I don't think this factors in with Black Series overall. I think those people are outliers, who just like to hide behind their keyboards. They likely don't have a huge presence in the collecting community.
Top

I just got the Nightbrother Archer in and he’s cool and all…But now that I’m caught up on getting all of my wanted already-released figures, I’m wondering what’s going to release next.

Lots of overseas videos of the comics figures of Leia, Vader, Kreel and Krrsantan as well as the deluxe Nalan Cheel.

And further still, the George Lucas figure has been out for months overseas and some US sites had an early batch, while YakFace says the Darktrooper cases arrived in the US a while ago too…

I know plenty of people still don’t even have the last wave, but I’m wondering what the next figures out will be. Hasbro distribution strikes again!

Personally I’m most hyped for the comics figures, oddly enough. I’ve been reading through them and really want that Leia and Kreel. Of course, I’m also excited for Reva and 5th Brother too.
Top

Still waiting on my Nightbrother Archers to ship. Got an email a week and a half/2 weeks ago that he was about to ship, but no movement since.
Top

What do you think the odds of us getting a Jaro Tapal are?
Top

joshsquash729 wrote: ↑
Mon Jun 27, 2022 7:51 pm
Still waiting on my Nightbrother Archers to ship. Got an email a week and a half/2 weeks ago that he was about to ship, but no movement since.

Me too. They even authorized my card twice in that time.
Top

I swear. I’m gonna start complaining more often. My George Lucas from Amazon is now set to deliver on Thursday!

Go ahead and complain about your preorders, everyone! 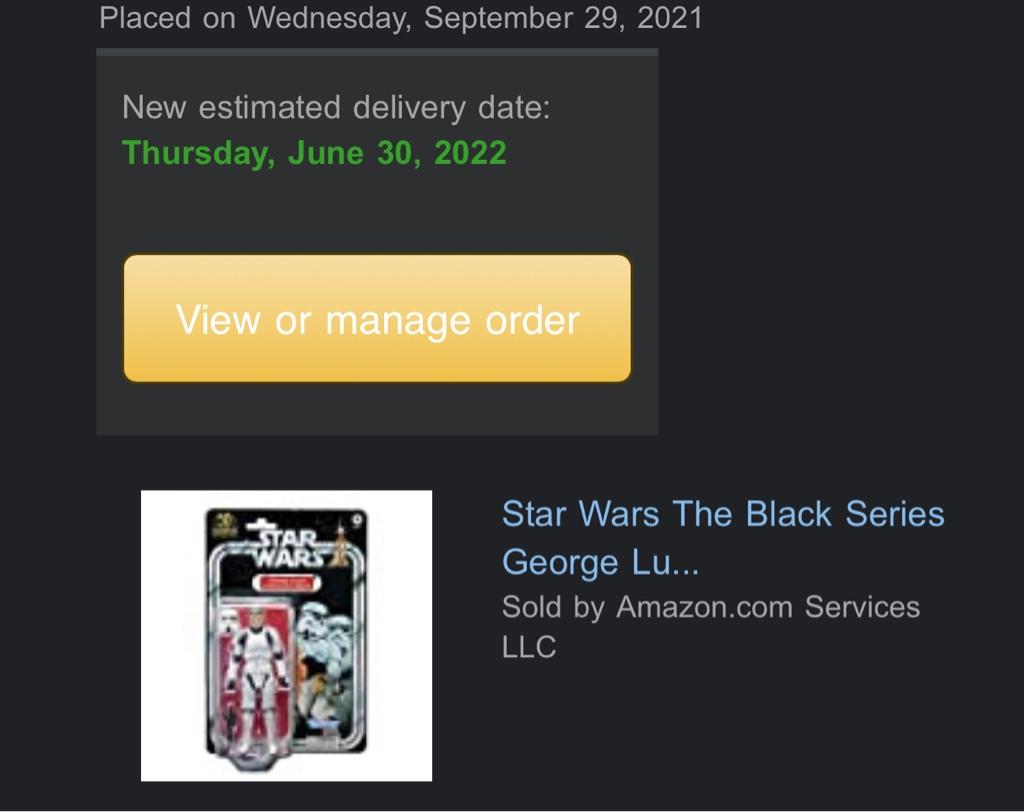 So… Amazon still has July 5th for Cobb Vanth. How hopeful are we that they will start shipping soon?
Top

Pulse delayed Vanth to Aug 1, but I guess it could go either way. Amazon is starting to ship Stormshadow, and Pulse just charged me for SS, Spirit, and Croc Master. It’s so hard to predict these days.
Top
Post Reply
9990 posts

Return to “Yavin 4: The Unofficial Star Wars Toy Board”