I'm going to hold off and wait for in-hand reviews. Actual reviews. Not some emotional influencer who has nothing but wonderful things to say because vintage SL was the last thing his dad bought him before the divorce.

Because there's no indication at all for ankle rockers.

And I need to know that anything printed on softer material isn't going to just rub off like the Fortnite Jules figure and her crappy rubber crop top.

But more importantly where the eff are the ankle rockers.
Top

os189 wrote:I was willing to pay MAFEX prices in a heartbeat for a LeBron in a Cavs jersey, but LeBron and his team will never let that happen.

His brand is all LAKERS LAKERS LAKERS now, and I'm sure after he retires, they will continue to push the narrative that he's a Laker and was always and only ever a Laker.

If you're a Cavs fan, I think you're in for a pleasant surprise. Pretty sure after LeBron retires, the narrative will be far more focused on his time in Cleveland than anything else, how he's the greatest thing ever to happen to Cleveland, what a hero he was in Cleveland, etc., especially since most of his time in LA, except for one bubble season that no one will remember, has been miserable. Until he becomes the owner of his own team, that is.

If this line were to succeed, I would imagine they would get to classic players, and if they did, LeBron in a Cavs jersey would probably have to happen at some point. But it's not surprising that wouldn't come initially. If he was retired, it'd be different. But he's an active member of the Lakers roster.


os189 wrote:I definitely get the feeling that we aren't the target audience for these, and it's possible that sports collectors/sneakerheads might be more forgiving of the shortcomings as action figures than we are.

Perhaps, but what evidence is there that sneakerheads are interested in action figures, even if they're of players? Maybe they've tapped into some vastly unmet market, but I don't see it. I think this is going to flop hard at these prices.

Sent from my Pixel 6a using Tapatalk

I've got a lot of complaints, but I'd be really bummed if this line collapsed after wave one. I think the NBA has the most marketable players (by a wide margin), but I'd still like to see the other sports get a shot. I'd also like to see some NBA legends. And Durant.

Misfit wrote: ↑
Thu Sep 22, 2022 8:38 pm
It's possible that's in the cards, though something like an NFT strikes me as the type of thing Hasbro would use to add perceived value to the product, but doesn't have a huge impact at the actual cost.


That's my guess as well. I don't think we'll ever see a stripped-down version.

mattmurdog wrote: ↑
Thu Sep 22, 2022 9:28 pm
Almost feel this line isn't targeted at the casual or even hardcore ML collectors. If ML collectors buy them, that's great too, but it's meant for the Sport collectors, Cryptos and Sneaker heads. Who knows this might end up being their gateway into other Hasbro figures like MCU and whatnot. It's all about generating new revenue and bringing in new audiences. At some point that Marvel well of nostalgia is going to run dry. We're starting to see that now.


Agreed. The fact that Fanatics was mentioned in the initial press release tells me that toy collectors are not the target market here.


Yup. He looks 6'7. He should be about Curry's height and probably even lither.

Luka is practically a dirty word here in Sacramento

Shouldn't that dirty word be Vlade in that case?


We all knew those were bad picks when they happened. At least, everyone outside of the PHX, SAC, and ATL front offices did. In retrospect, the Sacramento pick, in particular, is ghastly.


I mean, there must be ankle rockers, right? I can't see them, but... they must be there? It looks like Trae has them here: 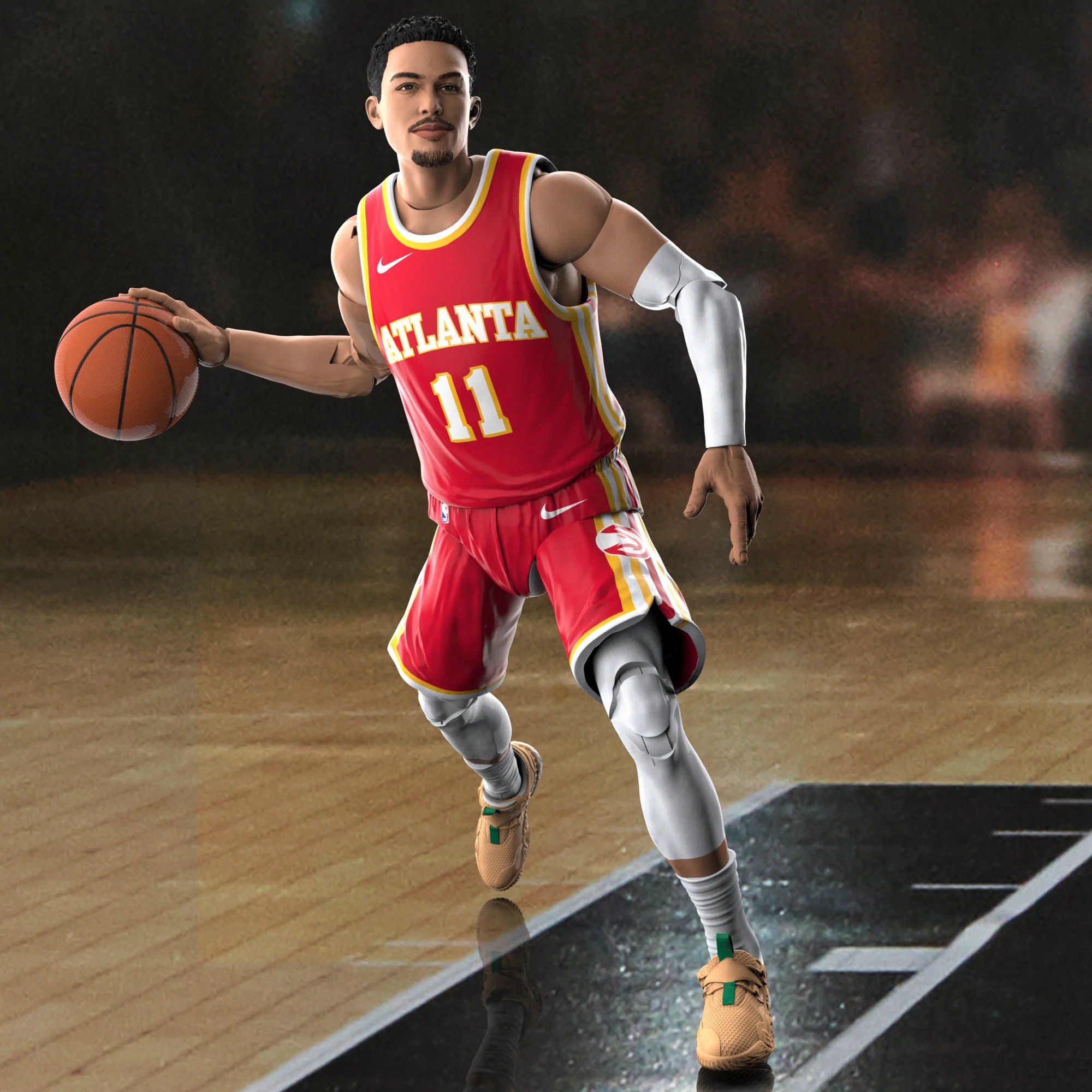 Now that you mention it, I'm concerned.
Top

I wanted to get LeBron and Jordan...but not for $50. Hasbro is going insane lately with new project prices.
Top

For $50, I need tats and at least another head sculpt to show some emotions. They're gonna look corny in action poses with emotionless faces. Pass
Top

I'm picking up Lebron, I would have pre-ordered more if the price wasn't so high. I hope we get Lebron in a Cavs and Heat uniform down the line. I think we all want legacy players like Jordan, Magic, Bird, etc. in this line too.
Top

Yea me too, ill pick up lebron but thats it. im getting him cause i dont have a skin color lebron, i have the Jazwares but he has chrome skin LOL and he does have the Heat jersey. Now on the hasbro figure, its the opposite, i get the skin color but not the Heat jersey, SMH.
Top

CapnKngaroo wrote: ↑
Fri Sep 23, 2022 3:01 am
These just don’t look right to me. Can’t put my finger on it but the shorts look too bulky or baggy I guess. Makes the figures look bloated. Plus they all look the same except for the faces of course. Steph should not have the same build as Lebron

he has been working out to bulk up to take the hits in the paint.

i was reading something friday that these are some limited editions. hopefully that means a lower priced release without the stand and goofy digital crap.
Top


Perhaps, but what evidence is there that sneakerheads are interested in action figures, even if they're of players? Maybe they've tapped into some vastly unmet market, but I don't see it. I think this is going to flop hard at these prices.

The Mezco collector scene is swollen with guys with too much money or no money but spending anyway, chasing down items for clout and fear of being left behind.

When I saw these, I think of every sneakerhead in a jersey and snapback who has bought Mezco, Mythic Legions, Hot Toys, and imports from me in Toronto. Who I have seen at toy shows chasing Mezco, Hot Toys, and and imports, anything that isn't at the "lowly" Legends and Black Series pricing.

There is a huge crossover with sneakerheads and sports lifestylists and higher grade action figures. It also crosses over into bespoke arcade sticks for the fighting game scene and cabinet community, and retro video gaming. I'm in these scenes. I know the type. When I saw these figures, I reckoned that was who they market researched.

Great collectors when you're selling. They don't even haggle.
Top

Yeah but those are like high quality lines with a deserved reputation for being high quality. If they sent you a completely random figure, you'd still be happy with it because it stands on its own merit.

Compared to them, Hasbro is just usually so... mid.
Top

I preordered a figure last night with an NFT attached to it, Square's Tifa Lockhart. I hope this isn't becoming a trend and I definitely hope it isn't adding a single penny to the cost because as I toy collector, y'know, I care about the physical object, not something in the cloud or wherever an NFT is Tifa is roughly $10 more than Square's current figures, but it's not scheduled to release until 4/2024, so they might just be factoring in their price hike (gouge).
Top

One thing that bugs me, and it's not a big deal, but they're all in their colored jerseys, which is preferable over their white jerseys. But the LeBron should be in his colored jersey too. Lakers use yellow/gold instead of white, but still, put them in their purple jerseys.
Top


In general I don't trust Hasbro to get scaling right, and that matters more for NBA players than any other line. And yep, Ja is supposed to be 6' 2" but is towering over Trae looking like he's around 6' 8" or so.

Curry's likeness looks to be the weakest. If the uniform hadn't tipped me off I wouldn't have guessed it was him. Luka isn't great either.
Top

His brand is all LAKERS LAKERS LAKERS now, and I'm sure after he retires, they will continue to push the narrative that he's a Laker and was always and only ever a Laker.

I do not think that's the case. Mitchell and ness make Cav Lebron Jerseys and are getting ready to roll out his Miami Heat jerseys. Those are things he has to sign off on.
Top
Post Reply
331 posts